(This is a major update to a post originally published here and on Row2K.com in 2005.)

What a frugal group rowing coaches can be. We scrimp, we budget, we fundraise – and we “do without” to make ends 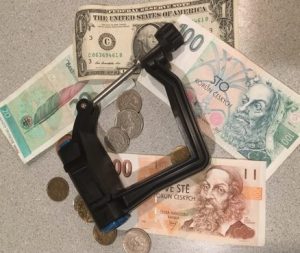 meet. In what some consider to be the “most-expensive-equipment-sport” we do our best to save a dollar. Yet, despite these efforts many rowing coaches waste money.

But not smart rowing coaches. They’ve figured out how to save money.

Why would a rowing coach want to save money?

Now that’s a silly question, isn’t it? Everyone wants to save money.

We aren’t a “saving” society, as evidenced by the low rate of personal savings. 34% of American adults do not have any savings. Zero. But YOU, as a coach, should want to save money. Why?

With the average cost of a new eight hovering somewhere around $25.00 to $40.00 per inch, being smart with your money on the small stuff might just help you when it comes time to buy the big items.

But rowing coaches are always thinking about ways to save, right?

Probably not. A rowing coach’s plate is usually full. There’s:

Add to that list the stress and strain of seat selection and racing. There’s not much time for a coach to think of other things, like saving money.

So it’s not that a rowing coach is wasteful on purpose, it’s just that saving money might not be on the action list.

But it should be—especially today.

So, how can a rowing coach save money?

I’m going to list several ways smart rowing coaches save money. There certainly are other ways, but these are ones you can do something about quickly and easily.

Action 1) Know what rowing equipment and supplies you ALREADY have

Boathouses, even the smallest ones, can be dark, cavernous places with a huge number of nooks and crannies. And in those places money hides.

Too often coaches order new items, replacements parts, or spare bits and pieces needlessly. They already have the stuff, they just don’t know it.

Suzie Orman has made a career out of giving financial advice—some of it very simple.

One tidbit I saw her present at a clinic really stood out and has saved me more than a few dollars—and it has the potential to save you thousands. That is to “know what you have.”

To save money, look around the boathouse and storage areas. Have someone do an inventory, and list what you have on paper. You may surprise yourself. Especially if you are new to the program.

Before you buy, know exactly what you already have.

Action 2) Buy only what rowing equipment you NEED, not what you WANT

Oh, it’s so tempting…we see an ad with a flashy new rowing gizmo in it, with two beautiful people holding it as they show off the first-place medals they just won.

And our impulse is, “I want that!”

Entrepreneur magazine recently noted that the price of an “impulse buy” is around $100.00. Meaning that it is now expected that people in their wanderings around a store will spend one hundred dollars just on impulse, without giving it much thought. Buying what they want, and not what they need.

Do you buy items for your program/team that you desire, but don’t need? Yes, I know, that new stroke-watch sure would look cool around your neck, but do you NEED it?

It’s not exciting. It’s not fun. And it might not even feel rewarding. But preventative maintenance is an investment which can yield great rewards.

Y’see, stuff breaks. And rowing equipment breaks all the time. All that wear-and-tear adds up.

Simple maintenance steps, such as oiling your erg chain, can extend the life of your equipment. And the longer it lives, the less often it needs to be replaced. And, bingo, that saves you money.

Excited about preventative maintenance (of course you are), then this could help your indoor rower last longer, and this can help your other equipment last longer than you ever thought it could.

So, if you’ve decided you HAVE to spend money, should you pay retail? Maybe. Maybe not. It depends if you can get a deal. It might be worth asking.

Years ago we were in need of an eight. The team had expanded, and we needed more seats. I didn’t have enough money for a new shell, but did have enough for a boat in good condition. I talked to a few boat manufacturers, and one had a boat they had just reconditioned. It was just a few years old and completely redone. They gave me a great price, with a warranty, and it was delivered in one week. Some times deals are there.

But you won’t know unless you ask.

Phil Schaaf wrote in his book Sport, Inc that, “the sports industry, essentially [is] a massive industry of selling. Teams sell tickets, broadcast rights, the backs of the chairs players sit on, virtual space, air space, billboard space, the names of buildings, kid zones, and anything that might have a value to a company outside the event.”

Wandering around a major regatta recently I noticed about half the boats had people’s names on them. Probably a donor’s name or honoring some person of note at the school. Good start.

But the other shells had names such as “Excalibur,” “Wet Dream,” and “Zippy.”

Imagine driving down the road. You spy a big old billboard. The only thing on it is the word “Spot.” The owner of the billboard decided to put up his dog’s name instead of advertising. If he does that often think he will be in business long? Me neither.

Don’t waste those opportunities, they are dollars waiting to happen.

So (again), how can rowing coach save money?

Old-timer coaches save their money and spend it wisely. That’s one reason they have lasted as a coach. You can do the same. Try the actions we just discussed:

Be frugal. Be fast. They do go hand-in-hand.