“…pay attention to the weather, [at the Charles] that’s key. We’ve had all sorts of conditions here. One year it snowed. People can get hypothermia here very quickly.”

This year is going to be your best Head of The Charles—ever!

Your training was super. The team arrived safely. Your equipment is ready.

Launch time is in an hour.

And then … the wind picks up … it gets colder … rain starts …

Your perfect day of racing is now a mess.

What you do next with your rowing equipment could make or break your Charles (or any rowing race).

Here’s the deal … we row in a boundary between the atmosphere and water. That leaves us particularly vulnerable to the weather. 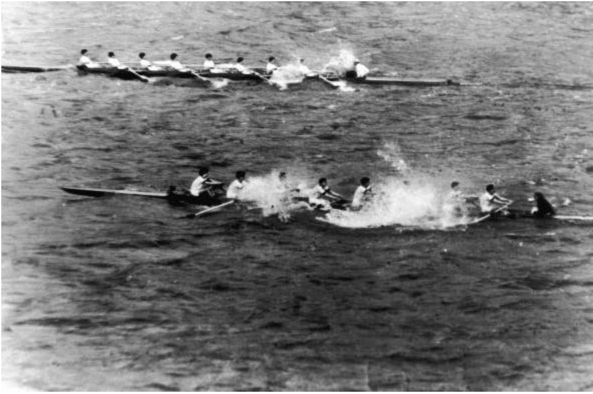 It can be a dangerous place to be.

And this is certainly true in Boston.

I know, I grew up there. And I can attest that the weather can change quickly, and dynamically.

I’ve raced the Charles in heat, cold, rain, snow, and beautiful weather. (Sometimes all in the same weekend.)

When the weather becomes challenging, what can you do with your rowing equipment to help you race your best ?

3 Suggestions For Rigging For Lousy Weather

We are especially vulnerable to the effects of weather in head races. The distance of the race can take you far away from the launch area. Twisting courses can put you in a variety of exposures to wind and weather.

For example, when racing at the Charles you:

The only direction you don’t race is east. BUT you row easterly getting to the starting line, so ALL directions are covered.

There’s not much protecting you from the weather. And on race day you might find yourself 3 miles or more from your launch area.

So what exactly should you do with your rowing equipment?

Suggestion 1: Prepare for the worse, hope for the best.

Prepare for lousy weather. That means bring stuff to use when the weather turns. I’ll get to those in a minute.

The Charles is one of the most effectively organized regattas in the world. Down to the smallest detail, they have it covered. 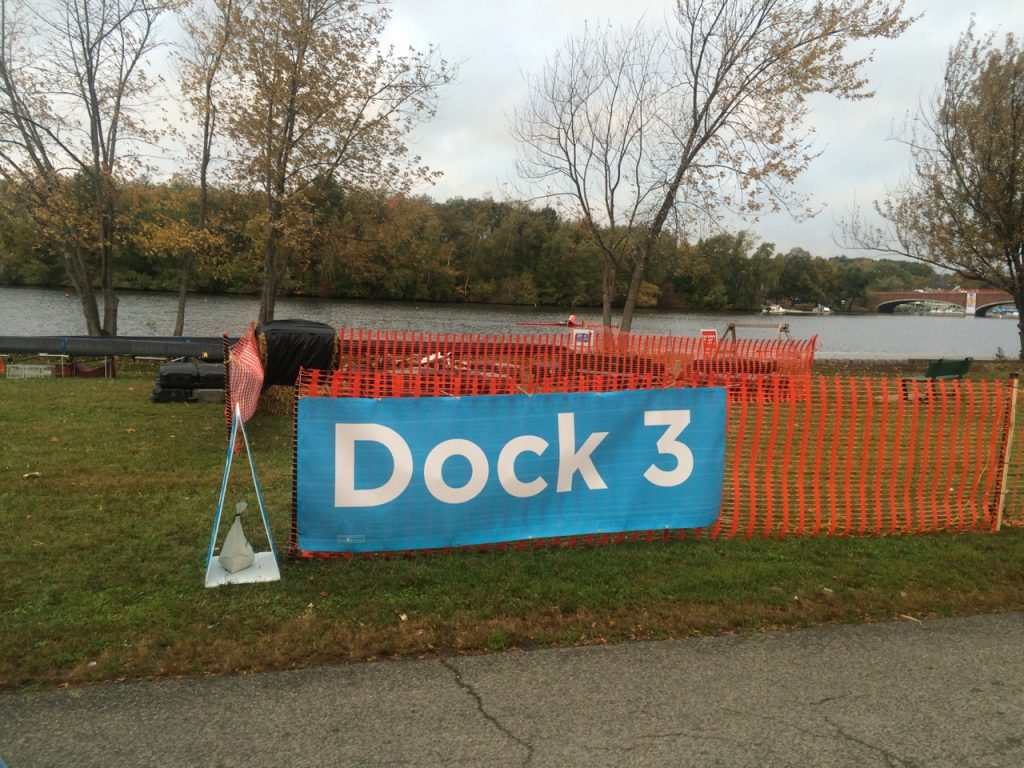 But that doesn’t absolve you from your weather responsibility. For example, get yourself a good weather app, that gives alerts, especially for lightning. I use a nifty one called WX Sentry.

If the weather is turning, go talk to the dock master, or check your app or the HOCR site. You don’t want to be the rower who thinks its a short course, when it isn’t.

When the weather turns, do something. Sitting and moaning isn’t an option.

Let’s drill down to what weather challenges Boston/Cambridge can (and will) throw at you. And what specific actions you can take.

Boston gets cold. Boston gets hot. In the Fall, if the temperature is extreme it will be cold.

Besides your personal clothing, there’s not too much to do to your rowing equipment for the temperature fluctuations … unless there’s …

If there’s rain/snow the first thing to do is to get your boat seats-down. It doesn’t take much rain or snow to overload slings.

Second, make sure you clean your handles/grips. Do this before you leave home, then redo at the course. You’ll have better control with a clean grip if it gets wet. If your hands are cold AND wet you’ll need all the grip you can get.

Here’s a video on cleaning Concept2 grips Get Your Oar Grip Race Ready, Right Now, and here’s another if you’re rowing Crokers. Other manufacturers may have suggestions on their site.

And with precipitation usually comes …

Wind can do a lot of damage to rowing equipment, both on and off the water. (I can still hear the sound of 4 boats crashing over at the same time, in their slings, due to an unexpected gust at the Occoquan Chase.)

So let’s be careful.

First, when a boat is in slings/racks always secure it, either by straps or humans. Don’t be “that rowing dork” who didn’t.

And be careful how you stack, and carry, your oars. It doesn’t take much wind to make an oar take off like a drone.

Here’s the deal…if you were racing a straight course, with a predominant wind, then I say to consider messing with the leverage (spread/span, inboard, oar length, etc).

But with the Charles, chances are you can have a head wind, tail wind, cross wind all in the same race.

“in all seriousness, you can’t expect it to be a consistent head or tail wind, and you need to be prepared for a wind change at any point in the course.”

If the wind is a N/NW I might consider lightening the load a bit, but usually just with a CLAM.

And with wind usually comes those nasty …

When wind meets water the friction will cause waves. Waves can make controlling the oars, and boat, very challenging.

At the Charles, the waves you need to be most concerned with are the ones in the basin. With a large surface area (called Fetch) for the wind to interact with the waves, they can get quite big. Rollers, large waves with a big peak-to-valley distance can be dangerous. Especially when the wind comes from E/NE.

When the waves are large, the Charles is good about calling for a short course, keeping people out of the basin (wicked challenging for those launching down there).

When waves are rowable, but still significant, there’s two rigging options that can help.

First, use splash guards. I write in length about the advantage of them here Row Better With A Super-Simple Splash Guard. Put them on, use them, be grateful if you don’t need them and thankful if you do.

Second, raise your height(s). This can work out well for chop, if you stay within a reasonable range (1-2 spacers, 1/4-1/2 inch). This can be very helpful especially to get through the basin. But with a lot of different directions of wind at Charles (because of direction changes of course) the height change you use to help get through the rough part is with you for the whole race. You DO have to survive the worst water to get to the best water, but I’d be conservative on how aggressive you are with changing the heights. (Hat tip to Tim Dhillon for reminding me of this.)

You’ve got to be ready for a lot of things in Boston, and one of those is the sudden appearance of clearing skies. A cloudy-to-clear sky can be an issue because the glare in the morning/afternoon can be very bright. And if it was cloudy when you launched you might not be prepared with sunglasses and a hat.

This could so happen to you…a mess… 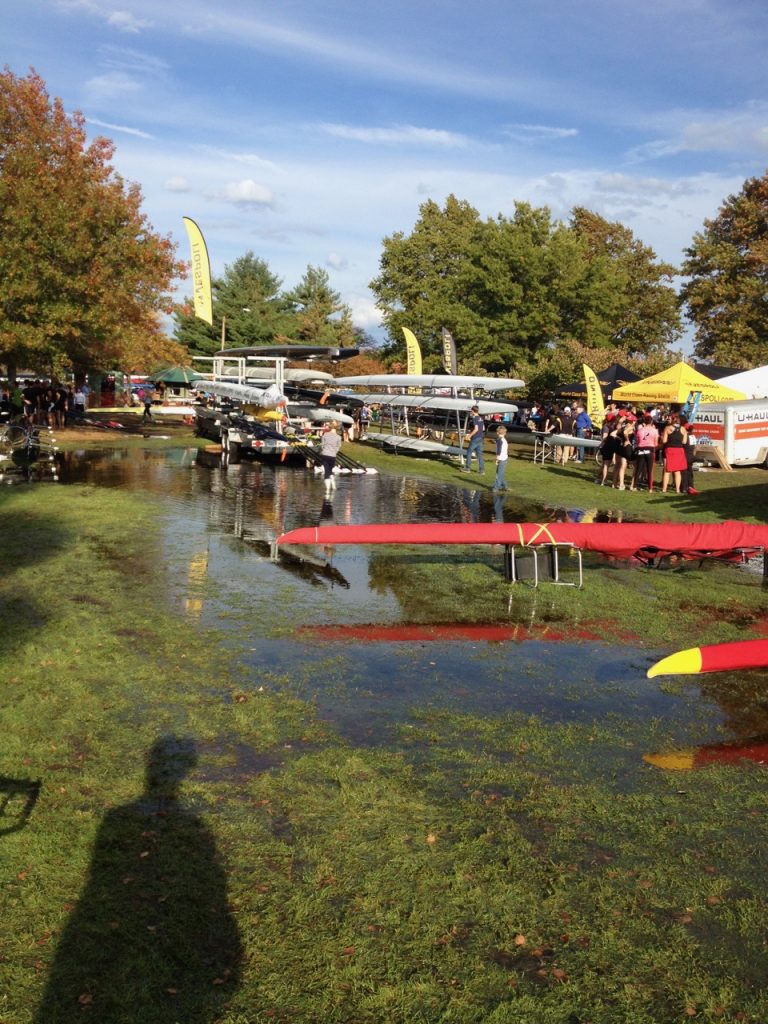 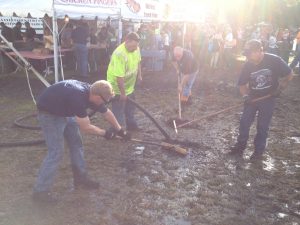 One year, on a rainy Charles weekend, standing water (and mud) was everywhere. The mud was on people, on oars, in boats.

If it happens to you, the critical thing is to keep mud out of your tracks. Lot of clean rags help.

If lightning is nearby at the Charles, they won’t allow you on the water.

And you should thank them. Electricity, and rowers don’t mix.

As Concept2 advises on their site, “Carbon fiber is electrically conductive. Keep away from power lines.”

The Charles will restrict rowing if lightning is detected, but what about other regattas?

There the decision to row/don’t-row may well fall on your shoulders.

More than once I’ve not-launched my crews because my lightning detector was showing strikes close by, and yet others were still launching.

Have a good lightning detector. You have one, right? For a few bucks (or free) you can get one on your smart phone.

Sudden runoff from storms can be an issue. Not really at the Charles, but at other regattas where the current can pick up and be a race- and safety-issue.

River current has a different impact on a shell then wind. First off, the wind impacts parts of a shell above the water, the current impacts below. Second, current is usually more consistent than wind—consider it a steady force compared to a variable one.

If you find yourself rowing into/with a significant current, you may want to decrease/increase your gearing. The goal is to make the load of the oar feel the same to the rower as they are used to.

However, a word of caution here, unless you’ve made changes like this before (whether CLAMS or spread/oar length change) I’d hesitate on jumping on the bandwagon.

Know where to bail out

Finally, if you’re on the water, and find yourself racing in lousy weather, you might need to bail out at another dock.

I witnessed this at the Charles first hand, back in 1996. Bad weather cancelled the regatta. We were getting ready to launch from MIT when the police came by and stopped people from launching. By that time, crews were landing wherever they could safely land. It was chaos for a while.

With smart phones, if this happens, it probably won’t be a big issue, more of a inconvenience. But something to be prepared for.

With a few simple actions you can be ready for racing in lousy weather. Prepare for the worse, and fingers crossed for a great weekend ahead.

Also, I’ll be presenting in two places this Fall. Love to have you join me if you can:

If you’d like to reduce some of the hassles in your rowing (and life) and get articles like this sent directly to your inbox, just click here.