I notice more and more rowers enduring over-compression at the catch.

Might be caused by longer tracks, or muscle weakness, or a bunch of other things.

Regardless, there is an optimal angle that should occur between the upper and lower leg at the catch.

That angle is typical somewhere between 48-52 degrees. That depends on several things, but it’s an average. 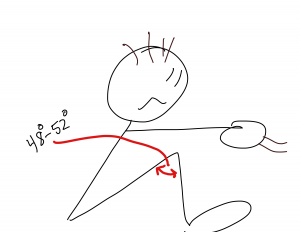 Over-compressing is when the angle is less, often significantly less. 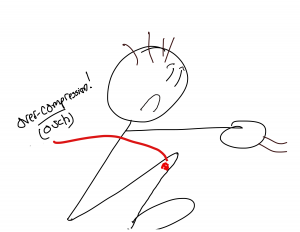 This happens mostly to newbies, and I believe it is because they don’t have a bench mark of where to stop their stern-motion and then begin their bow-motion, on the slide.

When they do make the catch and change directions it could be anywhere on the slide, and that usually leads to over-compression.

Should YOU care about over-compression?

You bet you should. Here are two reasons why.

An important step in controlling over-compression is proper foot stretcher placement. If I had a helium ballon for every improperly placed foot stretcher I’ve seen, I could float away.

Here’s how I do that: 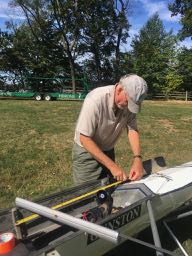 The secret sauce is the exact distance to use for the tape.

There is wide range you can use, obviously, and depending on how you row, style, etc, the numbers will vary.

For my rowing world, and the athlete’s I’m currently coaching, I use 88 cm as my go to length. For there, I add/subtract a few centimeters off of the 88 (for faster boats, I’ll add a few, slower boats, I’ll subtract a few). There’s a rationale to this I’ve written about here and here.

Once I get the foot stretchers where I want them, I want to get the tracks in the right spot.

You see, at the catch, the shins should be close to perpendicular. With the feet in the right spot for the rower, the super secret sauce is to move the seat tracks so that the stern-stops help reinforce a rower to not over-compress.

If the rower tries to over-compress, there’s a gentle tap when he/she hits the stern-stop. It’s a reminder to change directions to the bow.

The key here is that the stern-stops are just reminders and should not be a brick wall to be run into each stroke. Just-gentle-tapping, and before long you’ve used biomechanics to teach the rowers proper compression!!

It won’t work on all rowers, but it will work on many rowers.

(I cover this topic, and many more, in Nuts and Bolts Guide to Rigging.)

If you’d like to reduce some of the hassles in your rowing (and life) and get articles like this sent directly to your inbox, just click here.