I have an unpaid debt in the rowing world…

Years ago I was flipping through a magazine. I saw a cartoon that started a change in my life.

See, as a kid I never took things very seriously.

Heading off to college, I got sucked into rowing, and soon found myself deeply immersed in a very serious sport. Heck, a super-serious-sport.

One seemingly without much of a sense of humor.

Yeah, it was funny when Bobby caught an ejector crab, or Jack walked around school for hours with grease on the backs of his legs. But besides those few snickers, there wasn’t much to laugh about.

But then I saw that cartoon. It was by John Hooten. And it was this one, in fact: 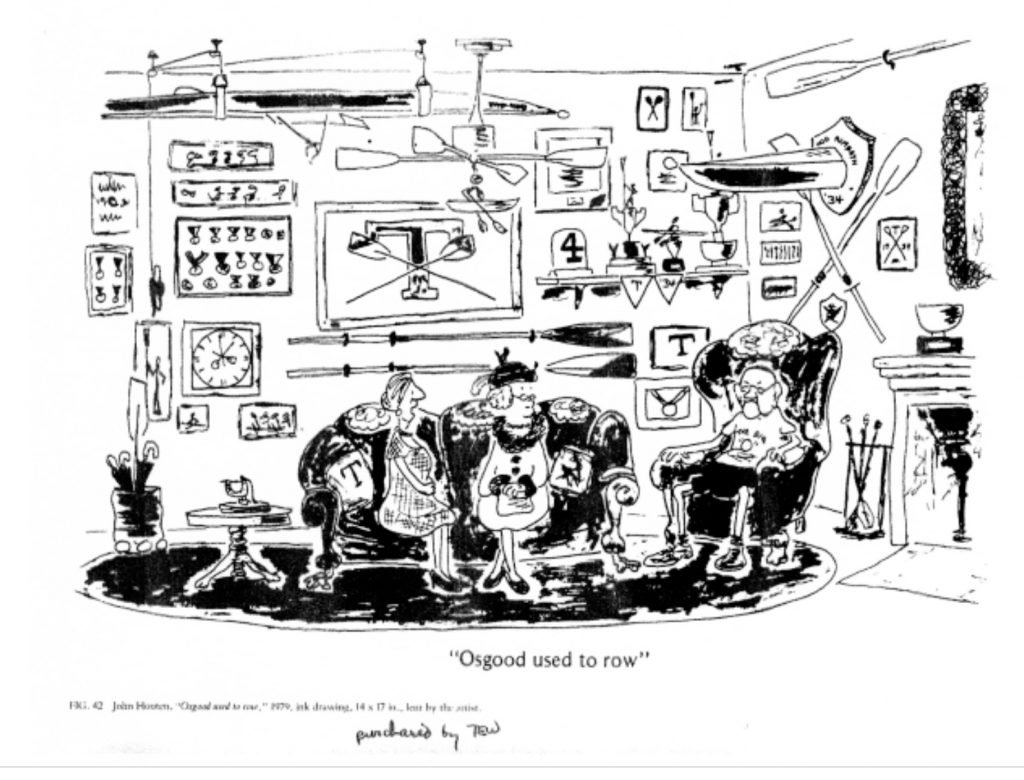 And that cartoon punched me in the arm.

Whoa…here was a guy, a super well-respected-coach-and-person in the world of rowing. Who had done really impressive things.

And he was cracking jokes. Poking fun at the seriousness of rowers in a serious sport.

In the moment I saw that cartoon it was as if Hooten had slapped me in the face, and gave me permission to stop taking the sport so seriously.

And it gave me the nudge to finally take the leap and do something I had resisted for years. I went ahead and wrote Nuts and Bolts Guide to Rigging.

As I wrote it…

my inner Resistance (as Steven Pressfield calls it) would start yelling: “WHAT?? You Can’t Write That! This IS ROWING”

Then I would take a breath.

Pull out my compilation of Hooten cartoons. As I do William Nealy’s. Or Scott McCloud’s.

And the Resistance would melt away.

But I’ve only heard stellar things about him. Like this quote from friend Joline Esparza:

“At appropriate and necessary moments, John would recite passages from The Hitchhikers Guide To The Galaxy. The towel thrown over John’s shoulder seemed so right.”

As I said, I never had the pleasure to meet John. But if I had I would have thanked him for guiding me past the Resistance.

I owe him a debt, which I intend to repay by continuing to pull back the curtain on the fun/humorous side of rigging, rowing equipment, and our sport.